Amos Wilson one of the most educated, wise Afrikan ancestors said we must be prepared to deal with any race or ethnicity whether the white man we know is powerful or not. Amos Magazine is not an Amos Wilson protege, don’t be fooled by his name. Let the Russians and the Western Europeans slug it out. We do not need to imitate the Alt Right movement and leach onto Russia as if they some are godsend saviours. He has done this in the past with the white Arab and is now sucking up to the Russians, a group Amos Wilson saw members of the white race. 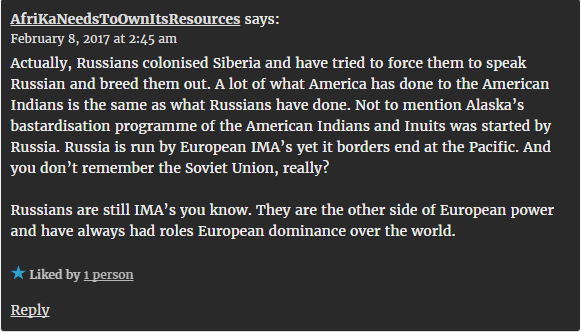 I labelled this screenshot Russians are IMA too, showing that I am anti-European as whole not some reactive ‘all white people ain’t racist’ pseudo-nationalist.

Before I give my retort in reply to Amos Magazines trumped up, deceitful comments I am going to go into context about Russia and their position in Europe. Russia is no better than America, the UK, France or any other Western European nation. It is a criminal European agent alongside them spreading the infestation of European culture on others. In particular, it holds a significant sway in the arming of conflicts in Afrika resulting in increased deaths. They are not to be supported or trusted. While it is good that they, along with the UK and Germany are creating a significant division in Europe leading to instability, Russians are not a people Afrikan people should be in awe of. We should not be cowering under their presence and their ability to do what we wish to do. They are Europeans after all and at the end of the day, they have never sided with Afrikans over any of their European and Eurasian brethren. They are even currently undermining Afrikan independence jointly with India, China, Brazil and the white hegemonic fiefdom of South Afrika. They are trying to form a web of dependence along with the West and it’s East Asian subordinates in what is viewed as a scramble for Afrika part two. They are enemies of Afrikans as much as any Western European.

These are Amos Magazine’s replies to my earlier post which is screenshotted near the beginning of this article. I am starting to think he doesn’t research at all. Siberia and Serbia are FAR from the same place. Siberia is the colonial dominion of the Eastern European, along with parts of Central Asia. The Eastern European is still European and did engage in imperial endeavours like their Western European cousins.

I live in Europe. Russians have always been considered Europeans. They have always been part of Christendom and are Orthodox showing their role in the geno-culture even prior to Catholicism. Russians are proud Europeans and are the UK/France/Germany of Eastern Europe. Russians are the chief ethnicity of Slavs who are the Eastern counterparts of the Germanics. These are the groups that took down and replaced the Latin and Roman peoples power. They are firmly European and have shaped European history uniquely and even the idea of Europe been a continent. Europe’s borders are roughly the same as medieval Christendom. It is to do with European ethnicities banding around their Christian descended socio-cultures and socio-genetics. The people who have bred a certain range of pale phenotypes alongside been of Christian and Roman influence. Europe’s well-defined border with Asia is not geographical where is the sea or ocean buffering it from Asia, there is a geno-culture though.

I said Siberia, not Serbia. I am not getting into your emotional filled arguments. You are a fraudulent Afrocentrist. I wrote about emotional black men, weak black men who are more interest in individual images, goals and arguments than community.

Go read up the Russian Siberia conquest. Siberia covers the entire region of North Asia even into the Far East. They have covered this up with the garbage of Russia is the biggest country. In fact, Russia and China almost went to nuclear war during the Cold War over land robbed from the Chinese by them in the 1800’s. Russia worked alongside Western European nations and the USA in invading and dicing up China, just like other Europeans did in Afrika. Russians colonised Siberia in order to keep up with Western Europeans and Americans who had stolen the resources of Afrika. You ignore the fact they couldn’t reach Afrika due to a backwards technology and geographic distance. They fought the British in Afghanistan during the 19th century, they were another group of IMA colonialists. Go research the Great Game, you are the one backing up European colonisers. I say fuck Russia and fuck the UK, you defend the one who you would prefer to be your master, talking about Serbia. I’m talking about Russians and the British in Central Asia and their attack on another geno-culture together on behalf of the European one. You are talking about Russia walking into its backyard Europe. This is basic stuff learnt in History at school in the background for World War One. Their Communist and pro-Communist proxies have caused less carnage, in Afrika during the Cold War than the West but have shown Russians are not allies, nor want an alliance with Afrikans. They are still European imperialists and neocolonialists albeit one Afrikans are not familiar with.

A side note is that in Alaska Russian did take in sprinkles of enslaved Afrikans from Spanish, French and British fellow invaders. These marauders from Europe were all involved in making the borders of the Americas. The Russians even bartered handfuls of Afrikans in bondage to Inuits and other American Indians and mestizos, the latter are known as metis in the region.

I speak regularly against the Anglo crooks who transgressed Afrikans so how dare this pseudo-nationalists, who spends half his time copy and pasting YouTube videos and making short pointless rants claim I am pro-Western. The West is a primary antagoniser of Afrikans but I refuse to budge on my stance with non-Afrikans as a whole which is what ACBN is about. Russia can certainly teach Western Europeans about codes of conduct and does have a moral high ground on them but I don’t care about making a stronger European geno-culture. I am not an Alt-Right follower. Anything to cause a disruption or weakening in the European power structure is needed routeing for the more stable group is not that. I do not support any of these bastards and neither should you but you are a pseudo-nationalist looking for a white father and mother to defend even against your own people. Whether that be Arab, Russian or some other disparaged IMA ran the group.

Your rants are interesting, sometimes informative but you are an individualist and delusional. You have separated from ACBN twice over personal belief, despite the fact others have disagreements they fail to mimic you. Somehow you choose to not engage with others at least to solidify a social stance that there are Afrikans for a biological basis in our social grouping. Instead, you promote your own individual biological nationalist movement. You have even exited commenting and socialising on the ACBN YouTube page with other blacks (under your Babatunde24 account) because of your belief in lizard people descended whites which you posted on your WordPress from a fellow pseudo-nationalist Young Pharoah. You purposely cut yourself off because of individual pride showing you view the individual to be superior to the group. That seems pretty petty, delusional and irrational to me. You are not a follower of Amos Wilson who spoke against individualism.